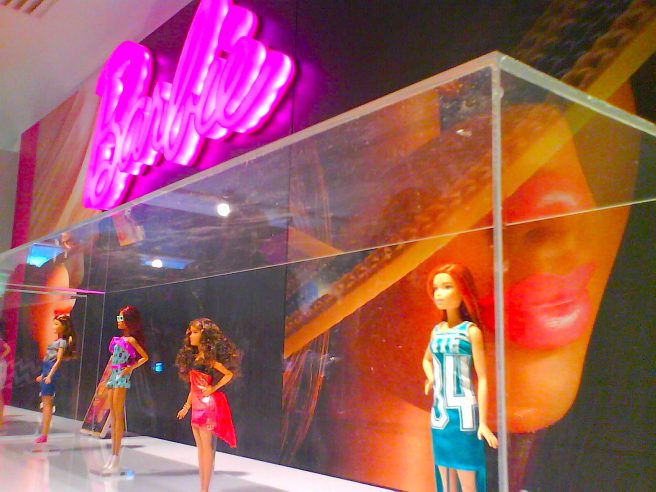 Very few people over 10 seem to be the least bit interested in this subject, and the under-10’s don’t check my blog, but I need to clear the air. If I’d known that someday you’d have a show at one of the most gorgeous museums in Paris, I would have paid a lot more attention to you! My mom’s dream when she was a little girl was to have a beautiful, expensive, built-to-last-forever Madame Alexander doll, so that’s what she scrimped and saved to get me and my sister. Even though we weren’t well off at all, I always felt sorry for  you and thought you were cheap. Forgive me, that was unfair. Still, your mother, Ruth Handler, claimed there were no “adult” dolls for girls before your birth in 1959 and that’s blatant false advertising. I’ll send you some pictures of Madame Alexander and she’ll knock your pink synthetic socks off! Pure elegance. Because you were never part of my personal fantasy world, I didn’t get upset about your silly body proportions, but I now know there are a billion of you out there! So yes, I guess we all have to take you seriously! That’s certainly what Mattel is after: legitimacy and recognition. The exhibit shows how you and your clones have become more racially diverse since the first African-American Barbie in 1968. The new “fashionista” series (pictured above) features more varied figures and ethnic traits. You now have outfits and accessories for every imaginable profession and sport! Since I consider sewing a high art on a par with architecture and lutherie, I admire all the thought and imagination your team puts into your costumes and the big room with wall to ceiling color-coded ensembles. 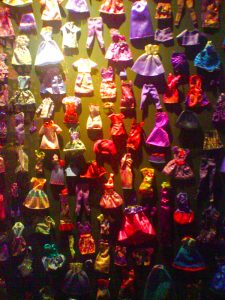 The doll factory staffed by more of your incarnations and the haute couture fashion show diorama are lovely make-believe worlds to explore: 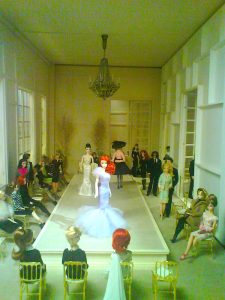 Truth be told, I only went to the show because another appointment was cancelled and I had a free pass, but I really wasn’t bored and will even go back, because my mind is full of questions:

Isn’t it ironic that your mother, daughter of Polish Jewish immigrants to the US, chose a sexist post-WWII German newspaper caricature as your template?

Also, are dolls supposed to reflect reality or are they for wish fulfillment and creative play? Looking at hundreds of you in display cases, I remembered another type of doll: prehistoric Venus figurines, possibly the first representations of a “female Supreme Creator”? On Wikipedia it says, “…they may be emblems of security and success, fertility icons, or direct representations of a mother goddess.” You’d be utterly horrified by their bulbous breast and buttocks! You were born in a time of prosperity and plenty when women were more worried about getting fat than about starving, just when the Pill was being invented, so does that mean you serve a social and physical purpose as women are taking their place in the work force, having smaller families, but also dealing with inactivity and obesity?

Russian Art studies also resurfaced. Since you’re an icon…did you know that in Byzantine iconography, “Although the icon represents the human form transfigured by grace in a stylized manner that respects realism, it never strives for naturalism. The person who is represented in any specific icon always refers back to the prototype. The human body is never depicted as carnal, but as transfigured. The terrestrial becomes celestial.” (http://www.atelier-st-andre.net/en/pages/aesthetics/aesthetic_outlines.html) (The basic unit of measure is length of nose! “The Byzantine form is based upon the module that corresponds to the length of the nose.“) If Andrei Roublev’s John the Baptist was a real person, he would be tall, oddly shaped, and inhumanly skinny (as you are accused of being…So, maybe we should get you together? He’s much more interesting than Ken.)

Still trying to figure all this out…Will try to upload illustrations…… Feedback welcome!!! to be continued…xxxxx Aliss

Unauthorized use and/or duplication of this material without express and written permission from this site's author and owner is strictly prohibited. Excerpts and links may be used, provided that full and clear credit is given to Aliss Valerie Terrell and Thank You Paris with appropriate and specific direction to the original content.
%d bloggers like this: