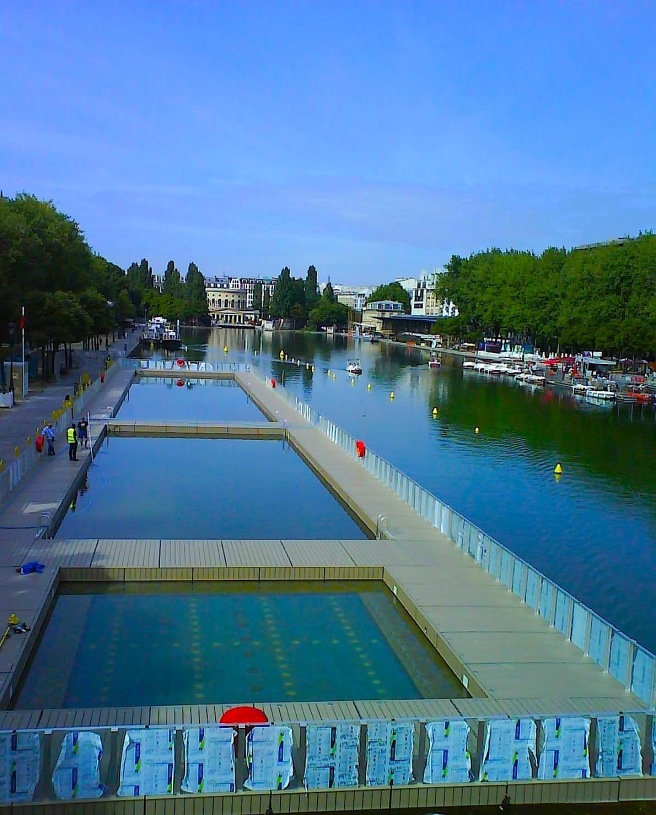 Paris has been working towards this for many years, well before the Summer Olympics bid, part of a long term environmental clean up and biodiversity project. What better way to raise awareness than to open a swimming area here? It’s a biofeedback loop for Parisians: water quality is monitored constantly and the pools will be closed whenever the water is unsafe. All around the enclosure displays show how this works, what sources of public and private pollution are being supervised, plant and animal species living in this water, how and why the waterway was constructed, how it has evolved… Maybe this will discourage deadbeats from throwing their refuse into the canal? Come swim and view the displays with your family, it’s a rich learning experience and a way to create a better future 🙂 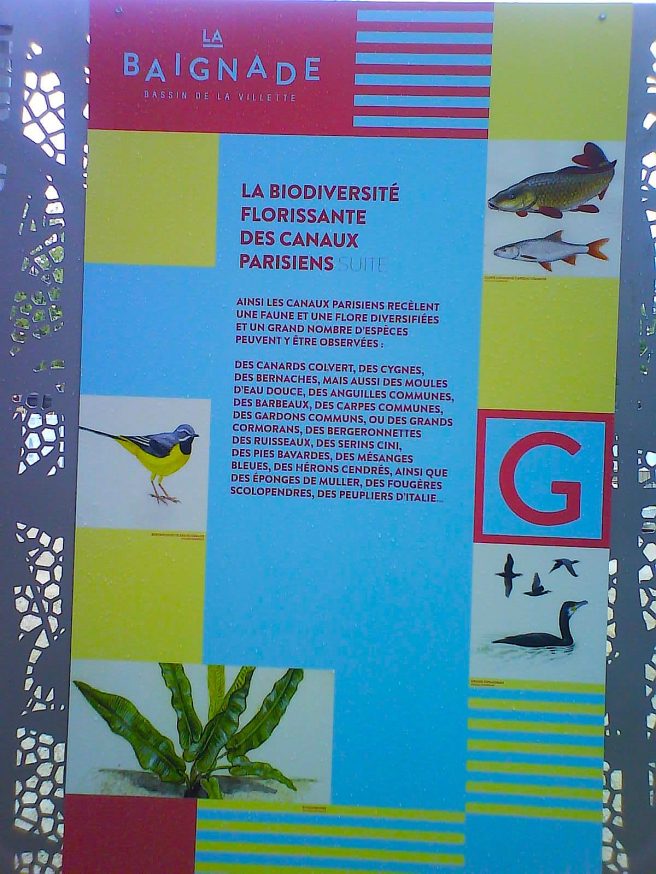 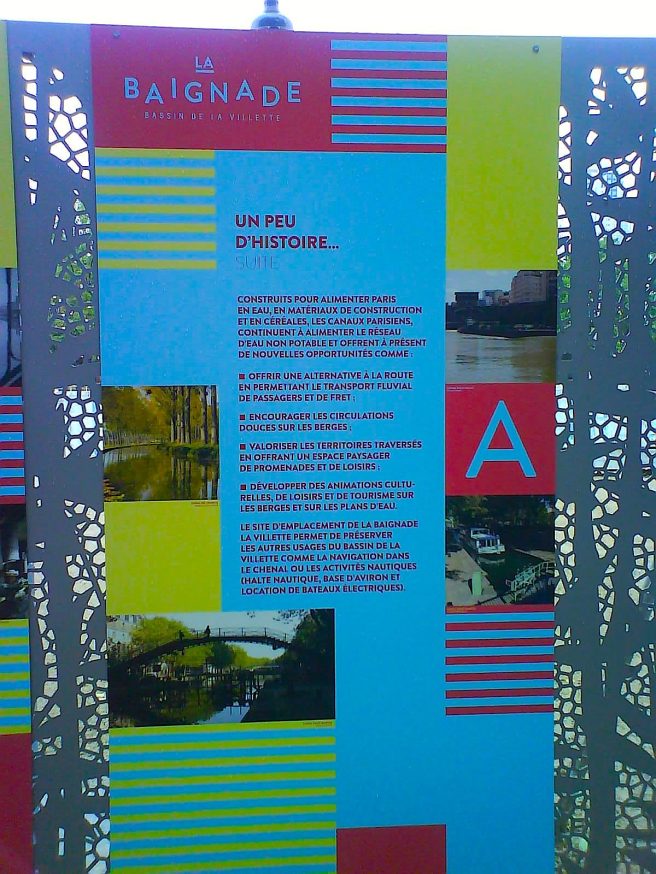 This summer, for the first time in 50 years, swimming in the Bassin de la Villette has been actively encouraged by the city on occasion, including last Sunday, as part of Paris’s bid for the summer 2024 Olympics and a larger environmental plan.

Flashback: Near the end of the last century, then-president Jacques Chirac, erstwhile Mayor of Paris, promised to swim in the Seine before the end of his mandate. A consortium of townships along the tributaries, including the canal system, formed to reduce pollution. Years passed without news as the dream receded into an indefinite future. Researching the neighborhood, I found out our local waterway was commissioned by Napoleon to provide fresh drinking water for parched Parisians, but was then defiled by sewage and manufacturing due to the Industrial revolution. For the past 5 decades, swimming was discouraged by fines. People still partook but rarely and at their own risk. A few months ago, the city announced its Olympic ambitions, including events in the canal and the Seine, starting summer 2017. The water quality has been monitored over recent years and was now supporting fish and wildlife.

Next thing I knew a preliminary swim was organized on the canal one cold June day, with a pontoon access, wetsuits on loan, showers, supervision and everything you’d expect from a modern metropolis.

Excitement started to mount and when I got back from summer vacation, news items began to appear in print and online about a long-distance race followed by open swimming scheduled for August 28th. Fanciful posters decorated billboards. The event was dubbed “La Fluctuat” from the city motto “Fluctuat Nec Mergitur” (Tempest-tossed but unsinkable):

Co-sponsored by the city and a scientific-sounding “Laboratoire des baignades urbaines expérimentales,” it was irresistible. So thousands of people, including my family and neighbors, trooped over there on Sunday and waited for the race to end and show our support by taking a dip. My peeps plopped down with lawn chairs and a cooler on the sunny side. The crowd was 4-deep along a cobbled walkway, euphoric in bathing suits and beach towels, jumping in and paddling around with floats provided by volunteers on the sidelines.

My own nautical motivation started to wane when I saw a 3-foot distance between water and embankment, with no pontoon or ladders in sight on our side. Chinning and pull-ups are not my strongest attribute. Could my friends pull me out of the water soaking wet?  My son is a strong swimmer, so I cheered when he jumped in, but kept an eye on him and hoped my water safety training wouldn’t be needed. It wasn’t. We basked in the late afternoon sunshine, surrounded by disrobed revellers. Perfect way to segue from vacation back to business after an intense year. “I can’t believe this is really happening!” “Pinch me, I must be dreaming!”  With my feet dangling in the cool water, I resolved to set up camp on the opposite side next time so I could climb in and out at will.

Then I noticed that all the lifeguards posted on surfboards during the race had disappeared. There were 2 men in wetsuits going up and down the Bassin in a zodiac, but no other safety measures. Something fishy was going on.

Sure enough, when we got home, reports in the media proclaimed that we had all braved the ban on public swimming. The “Laboratory of Experimental Urban Swims” turned out to be an association of activists whose permit application was denied by the city the day before? A huge publicity campaign had been launched without official support from the Mairie? Looks like we were a flashmob and didn’t know it…

In any case, no regrets. Hot showers and soap took care of whatever may have been in the water.  We all survived to tell the tale and make history, sharing a vision of rivers and canals coming back to life even in huge metropolitan areas.

When my daughter was a baby, the canal area above was a drug-infested post-industrial wasteland. I started finding bloody syringes in our building and was about to pull up stakes, when the powers that be rerouted traffic behind the colonnaded 18th century Rotonde to create an esplanade for carnivals and concerts. Suddenly there were playgrounds, cobblestone walkways, trees, and a bike path out to the country. Some brave local dads stood vigil around a crack house to attract media attention and organized petitions and protests until the dealers left. Movie theaters, restaurants, and a marina opened. Every summer the city stages Paris Plages, with its sandy beaches, palm trees, party lights, dance floors, and water sports. On weekends, singles and families wander to and from pétanque parties and picnics. All year round, you can watch double decker tour boats passing through the locks, wild swans, and sunsets. Risen from its ashes, the quartier is a hip destination. Against all odds, religious communities coexist without much friction, maybe because plaques at our elementary school door remind us everyday how almost 400 Jewish children were rounded up here and sent to death camps during the Occupation. The least we can do to honor them is keep the peace in our urban bubble.

Since 2011 Paris has created green and blue corridors (land and water migration paths) as part of a far-reaching Biodiversity Plan, no longer using chemical pesticides in public spaces and leaving many lawn areas fallow. Foxes, squirrels, hedgehogs, peregrine falcons, wild swans, bats have returned to the parks and waterways in our district and the water quality has improved enough for humans to return to the Bassin de la Villette for swimming summer 2017. Paris hopes to organize the summer Olympics in 2024 and hold aquatic events in the Seine 🙂

To be continued! xxxx Aliss

Unauthorized use and/or duplication of this material without express and written permission from this site's author and owner is strictly prohibited. Excerpts and links may be used, provided that full and clear credit is given to Aliss Valerie Terrell and Thank You Paris with appropriate and specific direction to the original content.